Its Agricultural, Nutritional and Social Contribution to Humankind 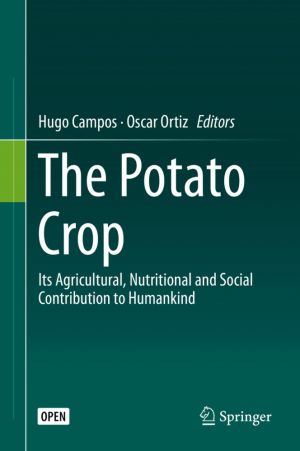 This book provides a fresh, updated and science-based perspective on the current status and prospects of the diverse array of topics related to the potato, and was written by distinguished scientists with hands-on global experience in research aspects related to potato. The potato is the third most important global food crop in terms of consumption. Being the only vegetatively propagated species among the world's main five staple crops creates both issues and opportunities for the potato: on the one hand, this constrains the speed of its geographic expansion and its options for international commercialization and distribution when compared with commodity crops such as maize, wheat or rice. On the other, it provides an effective insulation against speculation and unforeseen spikes in commodity prices, since the potato does not represent a good traded on global markets. These two factors highlight the underappreciated and underrated role of the potato as a dependable nutrition security crop, one that can mitigate turmoil in world food supply and demand and political instability in some developing countries. Increasingly, the global role of the potato has expanded from a profitable crop in developing countries to a crop providing income and nutrition security in developing ones. This book will appeal to academics and students of crop sciences, but also policy makers and other stakeholders involved in the potato and its contribution to humankind's food security.

This open book is licensed under a Creative Commons License (CC BY). You can download The Potato Crop ebook for free in PDF format (13.7 MB).

Pre-Field Screening Protocols for Heat-Tolerant Mutants in Rice
This book presents simple, robust pre-field screening protocols that allow plant breeders to screen for enhanced tolerance to heat stress in rice. Two critical heat-sensitive stages in the lifecycle of the rice crop are targeted – the seedling and flowering stages – with screening based on simple phenotypic responses. The protocols are based on...

The Climate-Smart Agriculture Papers
This volume shares new data relating to Climate-Smart Agriculture (CSA), with emphasis on experiences in Eastern and Southern Africa. The book is a collection of research by authors from over 30 institutions, spanning the public and private sectors, with specific knowledge on agricultural development in the region discussed. The material is assembl...