Theories in and of Mathematics Education 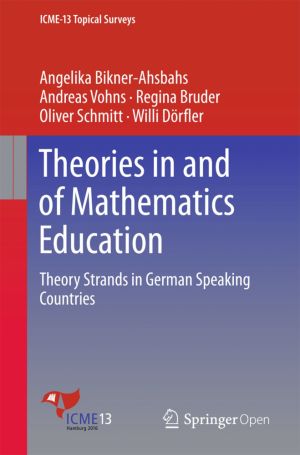 This survey provides an overview of German meta-discourse on theories and mathematics education as a scientific discipline, from the 1970s to the 1990s. Two theory strands are offered: a semiotic view related to Peirce and Wittgenstein (presented by Willibald Dörfler), and the theory of learning activity by Joachim Lompscher (presented by Regina Bruder and Oliver Schmitt). By networking the two theoretical approaches in a case study of learning fractions, it clarifies the nature of the two theories, how they can be related to inform practice and renew TME-issues for mathematics education as a scientific discipline. Hans-Georg Steiner initiated the first of five international conferences on Theories of Mathematics Education (TME) to advance the founding of mathematics education as a scientific discipline, and subsequently German researchers have continued to focus on TME topics but within various theory strands.

This open book is licensed under a Creative Commons License (CC BY). You can download Theories in and of Mathematics Education ebook for free in PDF format (1.3 MB).

International Reflections on the Netherlands Didactics of Mathematics
This book, inspired by the ICME 13 Thematic Afternoon on "European Didactic Traditions", takes readers on a journey with mathematics education researchers, developers and educators in eighteen countries, who reflect on their experiences with Realistic Mathematics Education (RME), the domain-specific instruction theory for mathematics educ...

European Traditions in Didactics of Mathematics
This book discusses several didactic traditions in mathematics education in countries across Europe, including France, the Netherlands, Italy, Germany, the Czech and Slovakian Republics, and the Scandinavian states. It shows that while they all share common features both in the practice of learning and teaching at school and in research and develop...