European Traditions in Didactics of Mathematics 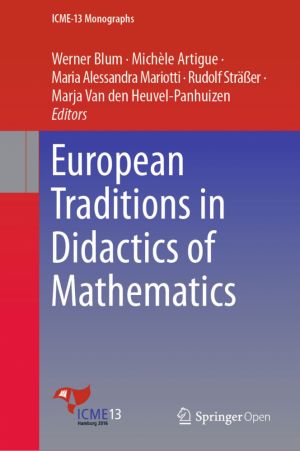 This book discusses several didactic traditions in mathematics education in countries across Europe, including France, the Netherlands, Italy, Germany, the Czech and Slovakian Republics, and the Scandinavian states. It shows that while they all share common features both in the practice of learning and teaching at school and in research and development, they each have special features due to specific historical and cultural developments. The book also presents interesting historical facts about these didactic traditions, the theories and examples developed in these countries.

This open book is licensed under a Creative Commons License (CC BY). You can download European Traditions in Didactics of Mathematics ebook for free in PDF format (3.5 MB).

International Reflections on the Netherlands Didactics of Mathematics
This book, inspired by the ICME 13 Thematic Afternoon on "European Didactic Traditions", takes readers on a journey with mathematics education researchers, developers and educators in eighteen countries, who reflect on their experiences with Realistic Mathematics Education (RME), the domain-specific instruction theory for mathematics educ...

Invited Lectures from the 13th International Congress on Mathematical Education
The book presents the Invited Lectures given at 13th International Congress on Mathematical Education (ICME-13). ICME-13 took place from 24th- 31st July 2016 at the University of Hamburg in Hamburg (Germany). The congress was hosted by the Society of Didactics of Mathematics (Gesellschaft für Didaktik der Mathematik - GDM) and took place under the...

Theories in and of Mathematics Education
This survey provides an overview of German meta-discourse on theories and mathematics education as a scientific discipline, from the 1970s to the 1990s. Two theory strands are offered: a semiotic view related to Peirce and Wittgenstein (presented by Willibald Dörfler), and the theory of learning activity by Joachim Lompscher (presented by Regina B...

A European Public Investment Outlook
This outlook provides a focused assessment of the state of public capital in the major European countries and identifies areas where public investment could contribute more to stable and sustainable growth. A European Public Investment Outlook brings together contributions from a range of international authors from diverse intellectual and professi...