The Rise of Young Cosmopolitans in Britain 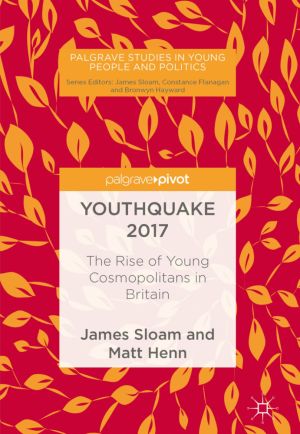 This book investigates the reasons behind the 2017 youthquake – which saw the highest rate of youth turnout in a quarter of a century, and an unprecedented gap in youth support for Labour over the Conservative Party – from both a comparative and a theoretical perspective. It compares youth turnout and party allegiance over time and traces changes in youth political participation in the UK since the onset of the 2008 global financial crisis – from austerity, to the 2016 EU referendum, to the rise of Corbyn – up until the election in June 2017 General Election. The book identifies the rise of cosmopolitan values and left-leaning attitudes amongst Young Millennials - particularly students and young women. The situation in the UK is also contrasted with developments in youth participation in other established democracies, including the youthquakes inspired by Obama in the US (2008) and Trudeau in Canada (2015).
James Sloam is Reader in Politics at Royal Holloway, University of London, UK. He is co-convenor of the UK Political Studies Association (PSA) specialist group on young people's politics. His work focuses on youth politics in Europe and the United States, inequalities in political participation, and the role of education in democratic engagement.Matt Henn is Professor of Social Research at Nottingham Trent University, UK. He is the Research Coordinator for Politics and International Relations and Coordinator of Postgraduate Research in the School of Social Sciences. He has published widely on the subject of young people and politics over the last two decades.

This open book is licensed under a Creative Commons License (CC BY). You can download Youthquake 2017 ebook for free in PDF format (2.2 MB).

Agile Processes in Software Engineering and Extreme Programming
This book constitutes the proceedings of the 18th International Conference on Agile Software Development, XP 2017, held in Cologne, Germany, in May 2017. The 14 full and 6 short papers presented in this volume were carefully reviewed and selected from 46 submissions. They were organized in topical sections named: improving agile processes; agile i...

Open Source Systems: Towards Robust Practices
This book constitutes the refereed proceedings of the 13th IFIP WG 2.13 International Conference on Open Source Systems, OSS 2017, held in Buenos Aires, Argentina, in May 2017. The 16 revised full papers and 3 short papers presented were carefully reviewed and selected from 32 submissions. The papers cover a wide range of topics related to free, l...

YOUMARES 8 – Oceans Across Boundaries: Learning from each other
This book presents the proceedings volume of the YOUMARES 8 conference, which took place in Kiel, Germany, in September 2017, supported by the German Association for Marine Sciences (DGM). The YOUMARES conference series is entirely bottom-up organized by and for YOUng MARine RESearchers. Qualified early career scientists moderated the scientific se...