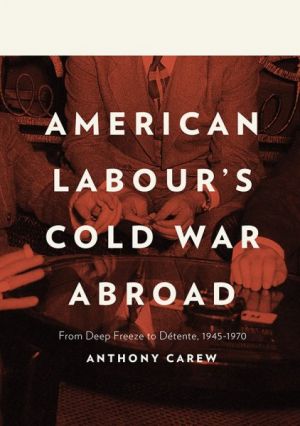 During the Cold War, American labour organizations were at the centre of the battle for the hearts and minds of working people. At a time when trade unions were a substantial force in both American and European politics, the fiercely anti-communist American Federation of Labor - Congress of Industrial Organizations (AFL - CIO), set a strong example for labour organizations overseas. The AFL - CIO cooperated closely with the US government on foreign policy and enjoyed an intimate, if sometimes strained, relationship with the CIA. The activities of its international staff, and especially the often secretive work of Jay Lovestone and Irving Brown - whose biographies read like characters plucked from a Le Carré novel - exerted a major influence on relationships in Europe and beyond.

Having mastered the enormous volume of correspondence and other records generated by staffers Lovestone and Brown, Carew presents a lively and clear account of what has largely been an unknown dimension of the Cold War. In impressive detail, Carew maps the international programs of the AFL - CIO during the Cold War and its relations with labour organizations abroad, in addition to providing a summary of the labour situation of a dozen or more countries including Finland, France, Italy, Germany, Japan, Greece, and India. American Labour's Cold War Abroad reveals how the Cold War compelled trade unionists to reflect on the role of unions in a free society. Yet there was to be no meeting of minds on this, and at the end of the 1960s the AFL - CIO broke with the mainstream of the international labour movement to pursue its own crusade against communism.

Chapter 1
Facing the Future - Labour's World in 1945
Chapter 2
Building Labour's Anti-Communist Opposition in Europe
Chapter 3
For Multilateralism or "Independent Activities"?
Chapter 4
The AFL and CIO Abroad: From Rivalry to Merger
Chapter 5
A Wedding Without a Honeymoon
Chapter 6
Into the 1960s: Claiming a Second ICFTU Scalp
Chapter 7
Who Speaks for American Labour?
Chapter 8
Toward an Independent Role
Chapter 9
Au Revoir Becomes Adieu
Chapter 10
Conclusion: The "Cold War" Within the Cold War

The Cold War in the Classroom
This book explores how the socially disputed period of the Cold War is remembered in today's history classroom. Applying a diverse set of methodological strategies, the authors map the dividing lines in and between memory cultures across the globe, paying special attention to the impact the crisis-driven age of our present has on images of the...

The Form of Ideology and the Ideology of Form
This timely volume focuses on the period of decolonization and the Cold War as the backdrop to the emergence of new and diverse literary aesthetics that accompanied anti-imperialist commitments and Afro-Asian solidarity. Competing internationalist frameworks produced a flurry of writings that made Asian, African and other world literatures visible ...

R.J. Rummel: An Assessment of His Many Contributions
The book provides a critical and constructive assessment of the many contributions to social science and politics made by Professor R. J. Rummel. Rummel was a prolific writer and an important teacher and mentor to a number of people who in turn have made their mark on the profession. His work has always been controversial. But after the end of the ...

Designing One Nation
The histories of East and West Germany traditionally emphasize the Cold War rivalries between the communist and capitalist nations. Yet, even as the countries diverged in their political directions, they had to create new ways of working together economically. In Designing One Nation, Katrin Schreiter examines the material culture of increasing ...