The Politics of Economic Culture and Trade in Divided Germany 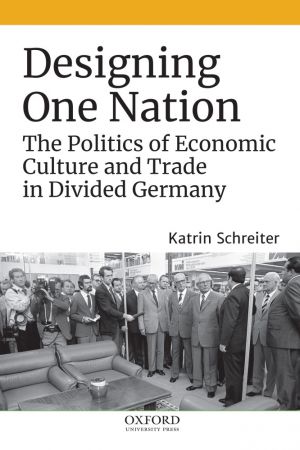 The histories of East and West Germany traditionally emphasize the Cold War rivalries between the communist and capitalist nations. Yet, even as the countries diverged in their political directions, they had to create new ways of working together economically.

In Designing One Nation, Katrin Schreiter examines the material culture of increasing economic contacts in divided Germany from the 1940s until the 1990s. Trade events, such as fairs and product shows, became one of the few venues for sustained links and knowledge between the two countries after the building of the Berlin Wall. Schreiter uses industrial design, epitomized by the furniture industry, to show how a network of politicians, entrepreneurs, and cultural brokers attempted to nationally re-inscribe their production cultures, define a postwar German identity, and regain economic stability and political influence in postwar Europe. What started as a competition for ideological superiority between East and West Germany quickly turned into a shared, politically legitimizing quest for an untainted post-fascist modernity. This work follows products from the drawing board into the homes of ordinary Germans to offer insights into how converging visions of German industrial modernity created shared expectations about economic progress and living standards. Schreiter reveals how intra-German and European trade policies drove the creation of products and generated a certain convergence of East and West German taste by the 1980s.

Drawing on a wide range of sources from governments, furniture firms, industrial design councils, home lifestyle magazines, and design exhibitions, Designing One Nation argues that an economic culture linked the two Germanies even before reunification in 1990.

This open book is licensed under a Creative Commons License (CC BY-NC-ND). You can download Designing One Nation ebook for free in PDF format (8.2 MB).

Communicating Science
Modern science communication has emerged in the twentieth century as a field of study, a body of practice and a profession - and it is a practice with deep historical roots. We have seen the birth of interactive science centres, the first university actions in teaching and conducting research, and a sharp growth in employment of science communicato...