The Form of Ideology and the Ideology of Form 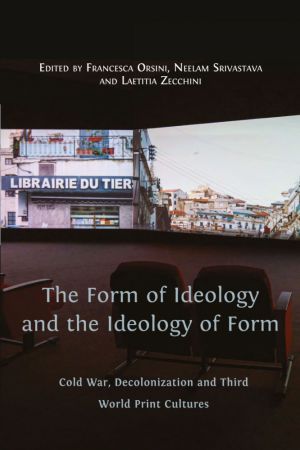 This timely volume focuses on the period of decolonization and the Cold War as the backdrop to the emergence of new and diverse literary aesthetics that accompanied anti-imperialist commitments and Afro-Asian solidarity. Competing internationalist frameworks produced a flurry of writings that made Asian, African and other world literatures visible to each other for the first time. The book's essays examine a host of print culture formats (magazines, newspapers, manifestos, conference proceedings, ephemera, etc.) and modes of cultural mediation and transnational exchange that enabled the construction of a variously inflected Third-World culture which played a determining role throughout the Cold War.

The essays in this collection focus on locations as diverse as Morocco, Tunisia, South Asia, China, Spain, and Italy, and on texts in Arabic, English, French, Hindi, Italian, Bengali, and Spanish. In doing so, they highlight the combination of local debates and struggles, and internationalist networks and aspirations that found expression in essays, novels, travelogues, translations, reviews, reportages and other literary forms.

With its comparative study of print cultures with a focus on decolonization and the Cold War, the volume makes a major contribution both to studies of postcolonial literary and print cultures, and to cultural Cold War studies in multilingual and non-Western contexts, and will be of interest to historians and literary scholars alike.

This open book is licensed under a Creative Commons License (CC BY-NC-ND). You can download The Form of Ideology and the Ideology of Form ebook for free in PDF format (32.4 MB).