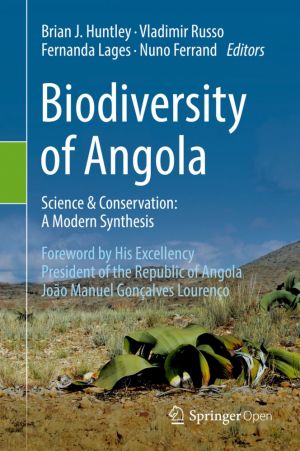 This book presents a 'state of the science' synthesis of knowledge on the biodiversity of Angola, based on sources in peer-reviewed journals, in books and where appropriate, unpublished official reports. The book identifies Angola as one of the most biologically diverse countries in Africa, but notes that its fauna, flora, habitats and the processes that drive the dynamics of its ecosystems are still very poorly researched and documented.This 'state of the science' synthesis is for the use of all students of Angola's biodiversity, and for those responsible for the planning, development and sustainable management of the country's living resources. The volume brings together the results of expeditions and research undertaken in Angola since the late eighteenth century, with emphasis on work conducted in the four decades since Angola's independence in 1975. The individual chapters have been written by leaders in their fields, and reviewed by peers familiar with the region.

This open book is licensed under a Creative Commons License (CC BY). You can download Biodiversity of Angola ebook for free in PDF format (31.8 MB).

Biodiversity and Health in the Face of Climate Change
This book identifies and discusses biodiversity's contribution to physical, mental and spiritual health and wellbeing. Furthermore, the book identifies the implications of this relationship for nature conservation, public health, landscape architecture and urban planning – and considers the opportunities of nature-based solutions for climate...

Remote Sensing of Plant Biodiversity
This open volume aims to methodologically improve our understanding of biodiversity by linking disciplines that incorporate remote sensing, and uniting data and perspectives in the fields of biology, landscape ecology, and geography. The book provides a framework for how biodiversity can be detected and evaluated - focusing particularly on plants -...

The GEO Handbook on Biodiversity Observation Networks
Biodiversity observation systems are almost everywhere inadequate to meet local, national and international (treaty) obligations. As a result of alarmingly rapid declines in biodiversity in the modern era, there is a strong, worldwide desire to upgrade our monitoring systems, but little clarity on what is actually needed and how it can be assembled...

New and Old Routes of Portuguese Emigration
This book offers a comparative overview on Portuguese emigration in Europe and outside the EU in times of recession. It looks at Portuguese emigrants who, after the crisis of 2008, moved both intra-EU, such as UK, France, Switzerland, Germany and Spain, but also into countries with historical links, such as the USA and Canada, and to Portuguese spe...

Railway Ecology
This book provides a unique overview of the impacts of railways on biodiversity, integrating the existing knowledge on the ecological effects of railways on wildlife, identifying major knowledge gaps and research directions and presenting the emerging field of railway ecology. The book is divided into two major parts: Part one offers a general revi...