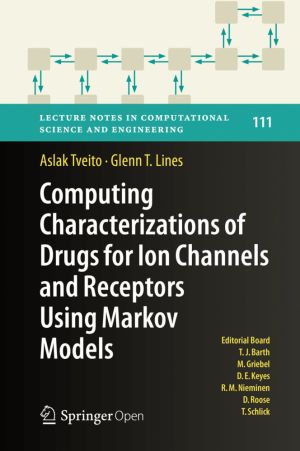 Flow of ions through voltage gated channels can be represented theoretically using stochastic differential equations where the gating mechanism is represented by a Markov model. The flow through a channel can be manipulated using various drugs, and the effect of a given drug can be reflected by changing the Markov model. These lecture notes provide an accessible introduction to the mathematical methods needed to deal with these models. They emphasize the use of numerical methods and provide sufficient details for the reader to implement the models and thereby study the effect of various drugs. Examples in the text include stochastic calcium release from internal storage systems in cells, as well as stochastic models of the transmembrane potential. Well known Markov models are studied and a systematic approach to including the effect of mutations is presented. Lastly, the book shows how to derive the optimal properties of a theoretical model of a drug for a given mutation defined in terms of a Markov model.

This open book is licensed under a Creative Commons License (CC BY-NC). You can download Computing Characterizations of Drugs for Ion Channels and Receptors Using Markov Models ebook for free in PDF format (7.4 MB).

Global History with Chinese Characteristics
This open book examines perceptions and dialogues between China and Europe by analysing strategic geopolitical sites which fostered commerce, consumption and socioeconomic networks between China and Europe through a particular case study: Macau, connecting with South China, and Marseille in Mediterranean Europe from 1680 to 1800. How did foreign me...

Geographic Citizen Science Design
Little did Isaac Newton, Charles Darwin and other 'gentlemen scientists' know, when they were making their scientific discoveries, that some centuries later they would inspire a new field of scientific practice and innovation, called citizen science. The current growth and availability of citizen science projects and relevant applications...