The Authors of the Commentaries 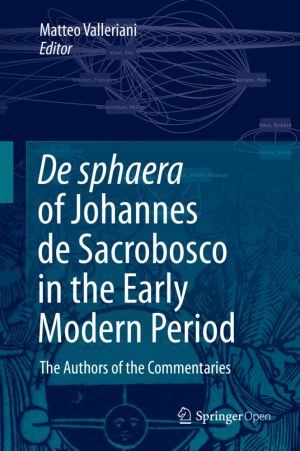 This open access book explores commentaries on an influential text of pre-Copernican astronomy in Europe. It features essays that take a close look at key intellectuals and how they engaged with the main ideas of this qualitative introduction to geocentric cosmology.

Johannes de Sacrobosco compiled his Tractatus de sphaera during the thirteenth century in the frame of his teaching activities at the then recently founded University of Paris. It soon became a mandatory text all over Europe. As a result, a tradition of commentaries to the text was soon established and flourished until the second half of the 17th century. Here, readers will find an informative overview of these commentaries complete with a rich context. The essays explore the educational and social backgrounds of the writers. They also detail how their careers developed after the publication of their commentaries, the institutions and patrons they were affiliated with, what their agenda was, and whether and how they actually accomplished it.

The editor of this collection considers these scientific commentaries as genuine scientific works. The contributors investigate them here not only in reference to the work on which it comments but also, and especially, as independent scientific contributions that are socially, institutionally, and intellectually contextualized around their authors.

This open book is licensed under a Creative Commons License (CC BY). You can download De sphaera of Johannes de Sacrobosco in the Early Modern Period ebook for free in PDF format (15.1 MB).

Acoustemologies in Contact
In this fascinating collection of essays, an international group of scholars explores the sonic consequences of transcultural contact in the early modern period. They examine how cultural configurations of sound impacted communication, comprehension, and the categorisation of people. Addressing questions of identity, difference, sound, and subjecti...

Urban Planning Against Poverty
This free book revisits the theoretical foundations of urban planning and the application of these concepts and methods in the context of Southern countries by examining several case studies from different regions of the world. For instance, the case of Koudougou, a medium-sized city in one of the poorest countries in the world, Burkina Faso, with ...

The Future of Financial Systems in the Digital Age
The increasing capacity of digital networks and computing power, together with the resulting connectivity and availability of "big data", are impacting financial systems worldwide with rapidly advancing deep-learning algorithms and distributed ledger technologies. They transform the structure and performance of financial markets, the serv...