Dignity in the 21st Century 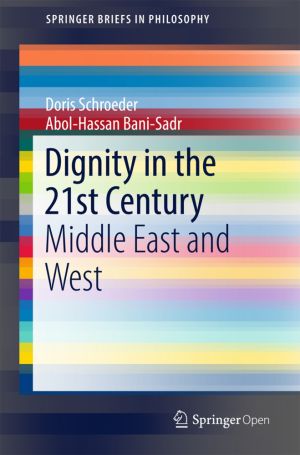 This book offers a unique and insightful analysis of Western and Middle Eastern concepts of dignity and illustrates them with examples of everyday life. Dignity in the 21st Century - Middle East and West is unique and insightful for a range of reasons. First, the book is co-authored by scholars from two different cultures (Middle East and West). As a result, the interpretations of dignity covered are broader than those in most Western publications. Second, the ambition of the book is to use examples from everyday life and fiction to debate a range of dignity interpretations supplemented by philosophical and theological theories. Thus, the book is designed to be accessible to a general readership, which is further facilitated because it is published with full open access. Third, the book does not defend one superior theory of dignity, but instead presents six Western approaches and one based on the Koran and then asks whether a common essence can be detected.

The answer to the question whether a common essence can be detected between the Koranic interpretation of dignity and the main Western theories (virtue, Kant) is YES. The essence can be seen in dignity as a sense of self-worth, which persons have a duty to develop and respect in themselves and a duty to protect in others. The book ends with two recommendations. First, given the 7 concepts of dignity introduced in the book, meaningful dialogue can only be achieved if conversation partners clarify which variation they are using. Second, future collaborations between philosophers and psychologists might be helpful in moving theoretical knowledge on dignity as a sense of self-worth into practical action. The "scourges" of a sense of self-worth and dignity are identified by psychologists as violence, humiliation, disregard and embarrassment. To know more about how these can be avoided from psychologists, is helpful when protecting a sense of self-worth in others.

This open book is licensed under a Creative Commons License (CC BY). You can download Dignity in the 21st Century ebook for free in PDF format (2.9 MB).

NL ARMS Netherlands Annual Review of Military Studies 2020
This open volume surveys the state of the field to examine whether a fifth wave of deterrence theory is emerging. Bringing together insights from world-leading experts from three continents, the volume identifies the most pressing strategic challenges, frames theoretical concepts, and describes new strategies. The use and utility of deterrence in...

Disrupting Finance
This open access Pivot demonstrates how a variety of technologies act as innovation catalysts within the banking and financial services sector. Traditional banks and financial services are under increasing competition from global IT companies such as Google, Apple, Amazon and PayPal whilst facing pressure from investors to reduce costs, increase ag...

Healthy Minds in the Twentieth Century
This open access edited collection contributes a new dimension to the study of mental health and psychiatry in the twentieth century. It takes the present literature beyond the 'asylum and after' paradigm to explore the multitude of spaces that have been permeated by concerns about mental well-being and illness. The chapters in this volum...