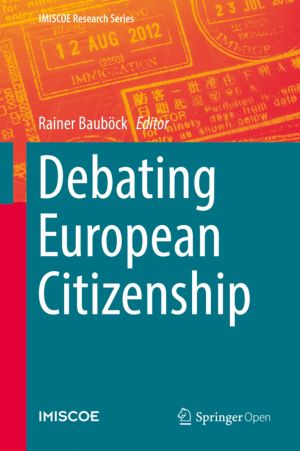 This book raises crucial questions about the citizenship of the European Union. Is it a new citizenship beyond the nation-state although it is derived from Member State nationality? Who should get it? What rights and duties does it entail? Should EU citizens living in other Member States be able to vote there in national elections? If there are tensions between free movement and social rights, which should take priority? And should the European Court of Justice determine what European citizenship is about or the legislative institutions of the EU or national parliaments? This book collects a wide range of answers to these questions from legal scholars, political scientists, and political practitioners. It is structured as a series of three conversations in which authors respond to each other. This exchange of arguments provides unique depth to the debate

This open book is licensed under a Creative Commons License (CC BY). You can download Debating European Citizenship ebook for free in PDF format (9.0 MB).

Constructing Roma Migrants
This book presents a cross-disciplinary insight and policy analysis into the effects of European legal and political frameworks on the life of 'Roma migrants' in Europe. It outlines the creation and implementation of Roma policies at the European level, provides a systematic understanding of identity-based exclusion and explores concrete ...