Young People's Perceptions of Europe in a Time of Change 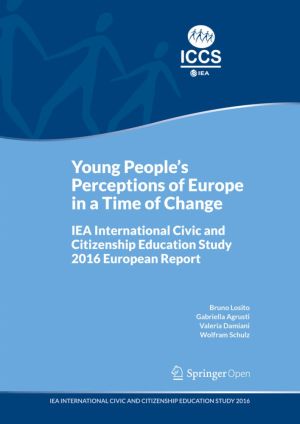 The IEA's International Civic and Citizenship Education Study (ICCS) investigates the ways in which young people are prepared to undertake their roles as citizens in a range of countries in the second decade of the 21st century. ICCS 2016 is the second cycle of a study initiated in 2009.
This report from ICCS focuses on data collected in the 15 countries that participated in the study's 2016 European regional questionnaire. It reveals lower secondary school students' views on European identity, their perceptions of freedom of movement and immigration, andtheir opinions of Europe and its future. It also, for the 12 European countries that participated in both ICCS 2009 and ICCS 2016, looks at changes across this time period, in young people's perceptions of immigration and European identity. Comparison with the complete internationalstudy will enable readers to review the extent to which region-specific perceptions are related to other factors, such as students' level of civic knowledge and social or educational contexts. Over the past 50 years, the IEA has conducted comparative research studies in a range ofdomains focusing on educational policies, practices, and outcomes in many countries around the world. The association conducted its first survey of civic education in 1971. The reliable comparative data collected by ICCS 2016 will allow education systems to evaluate the strengths of educational policies, both internationally and within a regional context, and to measure their progress toward achieving critical components of the United Nations' 2030 agenda for sustainable development.

This open book is licensed under a Creative Commons License (CC BY-NC). You can download Young People's Perceptions of Europe in a Time of Change ebook for free in PDF format (1.4 MB).

South-North Migration of EU Citizens in Times of Crisis
This book looks at the migration of Southern European EU citizens (from Portugal, Spain, Italy, Greece) who move to Northern European Member States (Belgium, France, Germany, United Kingdom) in response to the global economic crisis.Its objective is twofold. First, it identifies the scale and nature of this new Southern European emigration and exam...

Designing One Nation
The histories of East and West Germany traditionally emphasize the Cold War rivalries between the communist and capitalist nations. Yet, even as the countries diverged in their political directions, they had to create new ways of working together economically. In Designing One Nation, Katrin Schreiter examines the material culture of increasing ...