Freedom of Movement and Rights of Residence 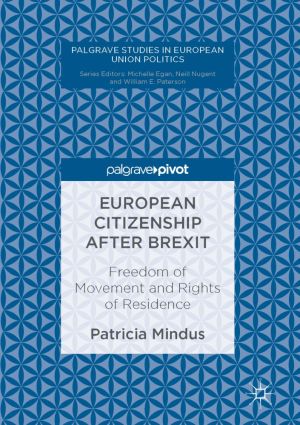 This book investigates European citizenship after Brexit, in light of the functionalist theory of citizenship. No matter its shape, Brexit will impact significantly on what has been labelled as one of the major achievements of EU integration: Citizenship of the Union. For the first time an automatic and collective lapse of status is observed. It is a form of involuntary loss of citizenship en masse, imposed by the automatic workings of the law on EU citizens of exclusively British nationality. It does not however create statelessness and it is likely to be tolerated under international law. This loss of citizenship is connected to a reduction of rights, affecting not solely the former Union citizens but also second country nationals in the United Kingdom and their family members.

This open book is licensed under a Creative Commons License (CC BY). You can download European Citizenship after Brexit ebook for free in PDF format (5.0 MB).

Debating European Citizenship
This book raises crucial questions about the citizenship of the European Union. Is it a new citizenship beyond the nation-state although it is derived from Member State nationality? Who should get it? What rights and duties does it entail? Should EU citizens living in other Member States be able to vote there in national elections? If there are ten...

Brexit and the Control of Tobacco Illicit Trade
This open book assesses the consequences of Brexit for the control of illicit trade in tobacco products in the UK and EU. Based on the currently applicable legal framework, it examines the significance of a possible non-application of the acquis communautaire in the UK in matters relating to anti-illicit trade in tobacco legislation. It also analys...

Youthquake 2017
This book investigates the reasons behind the 2017 youthquake – which saw the highest rate of youth turnout in a quarter of a century, and an unprecedented gap in youth support for Labour over the Conservative Party – from both a comparative and a theoretical perspective. It compares youth turnout and party allegiance over time and traces chang...