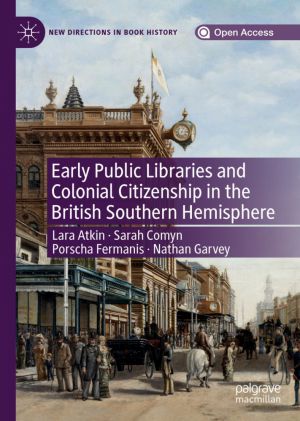 This open access Pivot book is a comparative study of six early colonial public libraries in nineteenth-century Australia, South Africa, and Southeast Asia. Drawing on networked conceptualisations of empire, transnational frameworks, and 'new imperial history' paradigms that privilege imbricated colonial and metropolitan 'intercultures', it looks at the neglected role of public libraries in shaping a programme of Anglophone civic education, scientific knowledge creation, and modernisation in the British southern hemisphere. The book's six chapters analyse institutional models and precedents, reading publics and types, book holdings and catalogues, and regional scientific networks in order to demonstrate the significance of these libraries for the construction of colonial identity, citizenship, and national self-government as well as charting their influence in shaping perceptions of social class, gender, and race. Using primary source material from the recently completed 'Book Catalogues of the Colonial Southern Hemisphere' digital archive, the book argues that public libraries played a formative role in colonial public discourse, contributing to broader debates on imperial citizenship and nation-statehood across different geographic, cultural, and linguistic borders.

This open book is licensed under a Creative Commons License (CC BY). You can download Early Public Libraries and Colonial Citizenship in the British Southern Hemisphere ebook for free in PDF format (3.0 MB).

Aging Well
This book outlines the challenges of supporting the health and wellbeing of older adults around the world and offers examples of solutions designed by stakeholders, healthcare providers, and public, private and nonprofit organizations in the United States. The solutions presented address challenges including: providing person-centered long-term car...