Probability and the Regress Problem 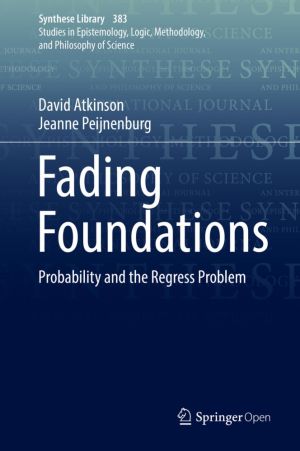 This book addresses the age-old problem of infinite regresses in epistemology. How can we ever come to know something if knowing requires having good reasons, and reasons can only be good if they are backed by good reasons in turn? The problem has puzzled philosophers ever since antiquity, giving rise to what is often called Agrippa's Trilemma. The current volume approaches the old problem in a provocative and thoroughly contemporary way. Taking seriously the idea that good reasons are typically probabilistic in character, it develops and defends a new solution that challenges venerable philosophical intuitions and explains why they were mistakenly held. Key to the new solution is the phenomenon of fading foundations, according to which distant reasons are less important than those that are nearby. The phenomenon takes the sting out of Agrippa's Trilemma; moreover, since the theory that describes it is general and abstract, it is readily applicable outside epistemology, notably to debates on infinite regresses in metaphysics. The book is a potential game-changer and a must for any advanced student or researcher in the field.

This open book is licensed under a Creative Commons License (CC BY). You can download Fading Foundations ebook for free in PDF format (2.3 MB).

Advances in Proof-Theoretic Semantics
This volume is the first ever collection devoted to the field of proof-theoretic semantics. Contributions address topics including the systematics of introduction and elimination rules and proofs of normalization, the categorial characterization of deductions, the relation between Heyting's and Gentzen's approaches to meaning, knowability...

The Foundations of Hip-Hop Encyclopedia
Deejaying, emceeing, graffiti writing, and breakdancing. Together, these artistic expressions combined to form the foundation of one of the most significant cultural phenomena of the late 20th century - Hip-Hop. Rooted in African American culture and experience, the music, fashion, art, and attitude that is Hip-Hop crossed both racial boundaries an...