From Classical Concepts to Operator Algebras 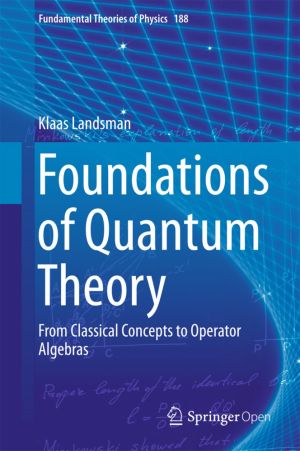 This book studies the foundations of quantum theory through its relationship to classical physics. This idea goes back to the Copenhagen Interpretation (in the original version due to Bohr and Heisenberg), which the author relates to the mathematical formalism of operator algebras originally created by von Neumann. The book therefore includes comprehensive appendices on functional analysis and C*-algebras, as well as a briefer one on logic, category theory, and topos theory. Matters of foundational as well as mathematical interest that are covered in detail include symmetry (and its "spontaneous" breaking), the measurement problem, the Kochen-Specker, Free Will, and Bell Theorems, the Kadison-Singer conjecture, quantization, indistinguishable particles, the quantum theory of large systems, and quantum logic, the latter in connection with the topos approach to quantum theory.

This open book is licensed under a Creative Commons License (CC BY). You can download Foundations of Quantum Theory ebook for free in PDF format (7.6 MB).

Advances in Proof-Theoretic Semantics
This volume is the first ever collection devoted to the field of proof-theoretic semantics. Contributions address topics including the systematics of introduction and elimination rules and proofs of normalization, the categorial characterization of deductions, the relation between Heyting's and Gentzen's approaches to meaning, knowability...

Life Histories of Etnos Theory in Russia and Beyond
The idea of etnos came into being over a hundred years ago as a way of understanding the collective identities of people with a common language and shared traditions. In the twentieth century, the concept came to be associated with Soviet state-building, and it fell sharply out of favour. Yet outside the academy, etnos-style arguments not only pers...

Foundations of Software Science and Computation Structures
This book constitutes the proceedings of the 21st International Conference on Foundations of Software Science and Computational Structures, FOSSACS 2018, which took place in Thessaloniki, Greece, in April 2018, held as part of the European Joint Conference on Theory and Practice of Software, ETAPS 2018.The 31 papers presented in this volume were ca...