Source code control and beyond 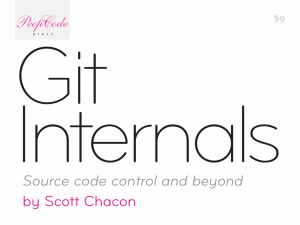 It took me a pretty long time to really get Git. As I've continued to use Git more and more where I work, I've found myself trying to teach people what it is and why we use it over and over again, and the reality is that Git generally has a pretty steep learning curve compared to many other systems. I've seen case after case of developers who love Git after they finally understand it, but getting to that point is often somewhat painstaking.

This book is aimed at the developer who does not particularly like Subversion, Perforce or whatever SCM system they are currently using, has heard good things about Git, but doesn't know where to start or why it's so wonderful. It is meant to explain Git as simply as possible in a clean, concise, easily readable volume. My goal is to help you understand Git internals as well as usage at a fundamental level by the time you finish this book.

To accomplish this, I'm starting the book out (after the introduction) with a section about what Git actually does, rather than how to use it. I found that I didn't really understand Git and had many problems using it until I understood what it was actually doing at a low level, rather than thinking of it as a different, weird SVN-like system.

This open book is licensed under a Creative Commons License (CC BY-SA). You can download Git Internals ebook for free in PDF format (3.0 MB).

Pro Git
Pro Git, 2nd Edition is your fully-updated guide to Git and its usage in the modern world. Git has come a long way since it was first developed by Linus Torvalds for Linux kernel development. It has taken the open source world by storm since its inception in 2005, and this book teaches you how to use it like a pro. Effective and well-implemented v...

Field Guide to the Distributed Development Stack
When you explore a new technology landscape, the journey can take you to places you never expected. Take O'Reilly's CTO, Andrew Odewahn. While working on ideas for a new publishing platform, Andrew kept notes as he probed the depth and breadth of what we call the "distributed development stack" (DDS). As patterns emerged, and...

Introduction to Data Science
The demand for skilled data science practitioners in industry, academia, and government is rapidly growing. This book introduces concepts and skills that can help you tackle real-world data analysis challenges. It covers concepts from probability, statistical inference, linear regression and machine learning. It also helps you develop skills such a...

The Unix Workbench
Learning the command line can be a difficult and intimidating task, but this book is designed to be your lighthouse in the modern computational storm. Unix is a 40 year old operating system that powers the internet, your phone, and the latest scientific research. This book aims to be a gateway to the world of computer programming, providing you wit...

Getting Started with InnerSource
Welcome to InnerSource, the powerful movement for developing open source software within the walls of a single organization, where the "openness" of a project extends across teams inside the company. In this report, O'Reilly editor and author Andy Oram takes you inside InnerSource, first by reviewing the principles that make open sou...