Magazines, Tourism, and Nation-Building in Mexico 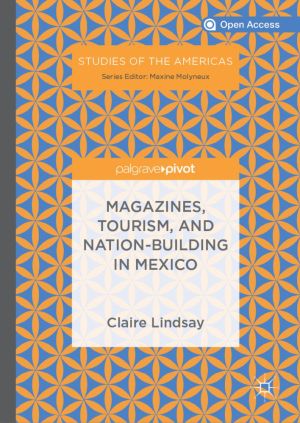 This free book discusses the relationship between periodicals, tourism, and nation-building in Mexico. It enquires into how magazines, a staple form of the promotional apparatus of tourism since its inception, articulated an imaginative geography of Mexico at a time when that industry became a critical means of economic recovery and political stability after the Revolution. Notwithstanding their vogue, popularity, reach, and close affiliations to commerce and state over several decades, magazines have not received any sustained critical attention in the scholarship on that period. This book aims to redress that oversight. It argues that illustrated magazines like Mexican Folkways (1925-1937) and Mexico This Month (1955-1971) offer rich and compelling materials in that regard, not only as unique tools for interrogating the ramifications of tourism on the country's reconstruction, but as autonomous objects of study that form a vital if complex part of Mexico's visual culture.

Claire Lindsay is Reader in Latin American Literature and Culture at University College London, UK. She is the author of Locating Latin American Women Writers and Contemporary Travel Writing of Latin America.

"In her illuminating and careful readings of Mexico This Month and Mexican Folkways, Claire Lindsay recuperates an important piece of Mexican and hemispheric American history. Magazines, Tourism, and Nation-Building in Mexico is an important and timely publication that will appeal to readers from across disciplinary fields." - María del Pilar Blanco, Associate Professor, Spanish American Literature, University of Oxford, UK

This open book is licensed under a Creative Commons License (CC BY). You can download Magazines, Tourism, and Nation-Building in Mexico ebook for free in PDF format (2.6 MB).

Open and Distance Education in Australia, Europe and the Americas
This free book describes the history, structure and institutions of open and distance education in six countries: Australia, Brazil, Canada, Germany, the UK and the US. It discusses how open and distance education is evolving in a digital age to reflect the needs and circumstances of national higher education systems in these countries, and explore...

Re-Inventing Africa's Development
This book analyses the development problems of sub-Sahara Africa (SSA) from the eyes of a Korean diplomat with knowledge of the economic growth Korea has experienced in recent decades. The author argues that Africa's development challenges are not due to a lack of resources but a lack of management, presenting an alternative to the traditional...