Of Cigarettes, High Heels, and Other Interesting Things

An Introduction to Semiotics 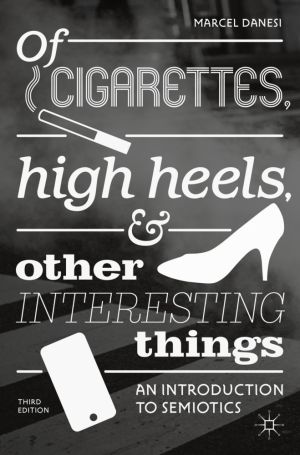 This book deals with one the most interesting aspects of human life - the search for meaning. It discusses how the science of semiotics is equipped to provide insight on what meaning is and how we produce it. Why is it that certain people routinely put their survival at risk by smoking? Why is it that some women make locomotion difficult for themselves by donning high-heel footwear? Are there unconscious forces at work behind such strange behaviors? This book will attempt to answer such questions by claiming that these behaviors are meaningful in culture-specific ways. The discipline that studies such behaviors and their relation to meanings is called semiotics. Semiotics probes the human condition in its own peculiar way, by unraveling the meanings of signs, which motivate not only the wearing of high heel shoes, but also the construction of words and art forms. Now in its third edition, this landmark introduction to semiotics has been updated with a wealth of new content, focusing on the many developments in digital culture since the previous edition. With the addition of topics such as memes, Selfies, social media profiles, and even Mafia discourse, the new edition comprehensively covers new trends in culture while streamlining treatments of basic semiotics contents.

Marcel Danesi is Professor of Semiotics and Anthropology at the University of Toronto, Canada. He is renowned for his work in several areas of semiotic study, including pop culture and metaphor. His work has been featured in the New York Times, Toronto Star, and Psychology Today, among other print publications. He is currently Editor-in-Chief of Semiotica, the leading journal in semiotics.

This open book is licensed under a Creative Commons License (CC BY). You can download Of Cigarettes, High Heels, and Other Interesting Things ebook for free in PDF format (2.0 MB).

Cosmology for the Curious
This book is an introductory text for all those wishing to learn about modern views of the cosmos. Our universe originated in a great explosion – the big bang. For nearly a century cosmologists have studied the aftermath of this explosion: how the universe expanded and cooled down, and how galaxies were gradually assembled by gravity. The nature ...

Storytelling in Northern Zambia
Storytelling plays an important part in the vibrant cultural life of Zambia and in many other communities across Africa. This innovative book provides a collection and analysis of oral narrative traditions as practiced by five Bemba-speaking ethnic groups in Zambia. The integration of newly digitalised audio and video recordings into the text enabl...

Everything Flows
Everything Flows explores the metaphysical thesis that the living world is not made up of substantial particles or things, as has often been supposed, but is rather constituted by processes. The biological domain is organised as an interdependent hierarchy of processes, which are stabilized and actively maintained at different timescales. Even enti...

Performing Deception
In Performing Deception, Brian Rappert reconstructs the practice of entertainment magic by analysing it through the lens of perception, deception and learning, as he goes about studying conjuring himself. Through this novel meditation on reasoning and skill, Rappert elevates magic from the undertaking of mere trickery to an art that offers the b...

The Future of the Law of the Sea
It explores the diverse phenomena which are challenging the international law of the sea today, using the unique perspective of a simultaneous analysis of the national, individual and common interests at stake. This perspective, which all the contributors bear in mind when treating their own topic, also constitutes a useful element in the effort to...