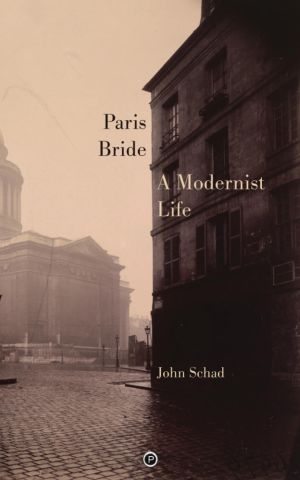 In July 1905, in Paris, a young Anglo-French woman called Marie Wheeler became the bride of a Swiss émigré, Johannes Schad. Immediately after the wedding, Marie and Johannes moved to London. And there they lived for nineteen years. In 1924, however, something happened to change their lives, and Marie, in many respects, simply disappeared.

Paris Bride is an exploration of the lost life of Marie Schad, of whom little is known beyond a few legal papers, a number of letters, some photographs, the diaries of a friend, and her obituary. With so little else known of Marie's life, this book seeks to read her back into existence by drawing on a host of contemporaneous texts - largely modernist texts, by Virginia Woolf, Franz Kafka, the Paris Surrealists, Stéphane Mallarmé, Oscar Wilde, Katherine Mansfield, and Walter Benjamin. All of the selected authors are connected with Marie through some coincidence of time, place, or theme.

In an attempt to do justice to Marie's in-visibility, or to her un-life, Paris Bride takes as its guide Wilde's declaration that "the true function of criticism is to see the object as in itself it really is not." In other words, this book seeks to evade the positivist or realist assumptions of conventional literary criticism, and instead pursue a post-critical method with its sources and texts. Paris Bride is not confined to academic discourse but instead draws on a range of literary genres and devices that are more in sympathy with the non-realist character of modernism itself - devices such as fragmentation, flânerie, textual collage, stream of consciousness, imagism, perspectivism, dream-text, the absurd, etc. Ultimately, Paris Bride is a modernistic experiment in life-writing.

This open book is licensed under a Creative Commons License (CC BY-NC-SA). You can download Paris Bride ebook for free in PDF format (20.7 MB).

Achieving the Paris Climate Agreement Goals
This book presents detailed pathways to achieve 100% renewable energy by 2050, globally and across ten geographical regions. Based on state-of-the-art scenario modelling, it provides the vital missing link between renewable energy targets and the measures needed to achieve them. Bringing together the latest research in climate science, renewable en...

Paris Climate Agreement: Beacon of Hope
This book presents an Empirical Model of Global Climate developed by the authors and uses that model to show that global warming will likely remain below 2ºC, relative to preindustrial, throughout this century provided: a) both the unconditional and conditional Paris INDC commitments are followed; b) the emission reductions needed to achieve the P...

IUTAM
This book presents extensive information related to the history of IUTAM. The initial chapters focus on IUTAM's history and selected organizational aspects. Subsequent chapters provide extensive data and statistics, while the closing section showcases photos from all periods of the Union's history.The history of IUTAM, the International Union on Th...

Retirement Home? Ageing Migrant Workers in France and the Question of Return
This book offers new insights into the ageing-migration nexus and the nature of home. Documenting the hidden world of France's migrant worker hostels, it explores why older North and West African men continue to live past retirement age in this sub-standard housing. Conventional wisdom holds that at retirement labour migrants ought to instead retur...

Musical Cities
Musical Cities represents an innovative approach to scholarly research and dissemination. A digital and interactive 'book', it explores the rhythms of our cities, and the role they play in our everyday urban lives, through the use of sound and music. Sara Adhitya first discusses why we should listen to urban rhythms in order to design more livea...