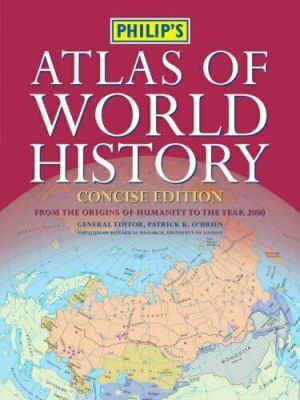 There could be no more opportune time than the start of the third millennium AD to produce an entirely new atlas of world history. Not only does this symbolic (if arbitrary) moment provoke a mood of public retrospection, but the pace of global change itself demands a greater awareness of "whole world" history.

More than 20 years have passed since a major new atlas of this kind was published in the English language. In that period there has been an explosion of new research into the histories of regions outside Europe and North America, and a growing awareness of how parochial our traditional approach to history has been. In this changed environment, the demand for an un-biased overview of world history has steadily grown in schools and colleges, and among the general reading public.

This open book is licensed under a Creative Commons License (CC BY). You can download Philip's Atlas of World History ebook for free in PDF format (59.8 MB).

Global History and New Polycentric Approaches
Rethinking the ways global history is envisioned and conceptualized in diverse countries such as China, Japan, Mexico or Spain, this collections considers how global issues are connected with our local and national communities. It examines how the discipline had evolved in various historiographies, from Anglo Saxon to southern European, and its eme...

A History of Self-Harm in Britain
This book fall of various self-harming behaviours in twentieth-century Britain. It puts self-cutting and overdosing into historical perspective, linking them to the huge changes that occur in mental and physical healthcare, social work and wider politics....

Paths to the Emerging State in Asia and Africa
This book addresses the issue of how a country, which was incorporated into the world economy as a periphery, could make a transition to the emerging state, capable of undertaking the task of economic development and industrialization. It offers historical and contemporary case studies of transition, as well as the international background under wh...

Across the Sahara
This open book provides a multi-perspective approach to the caravan trade in the Sahara during the 19th century. Based on travelogues from European travelers, recently found Arab sources, historical maps and results from several expeditions, the book gives an overview of the historical periods of the caravan trade as well as detailed information ab...

One Hundred Years of Chemical Warfare: Research, Deployment, Consequences
Carried by a long-awaited wind, the chlorine cloud passed within a few minutes through the British and French trenches, leaving behind at least 1,000 dead and 4,000 injured. This chemical attack, which amounted to the first use of a weapon of mass destruction, marks a turning point in world history. The preparation as well as the execution of the g...