South-North Migration of EU Citizens in Times of Crisis 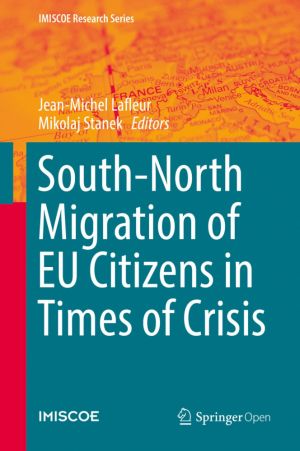 This book looks at the migration of Southern European EU citizens (from Portugal, Spain, Italy, Greece) who move to Northern European Member States (Belgium, France, Germany, United Kingdom) in response to the global economic crisis.Its objective is twofold. First, it identifies the scale and nature of this new Southern European emigration and examines these migrants' socio-economic integration in Northern European destination countries. This is achieved through an analysis of the most recent data on flows and profiles of this new labour force using sending-country and receiving-country databases. Second, it looks at the politics and policies of immigration, both from the perspective of the sending- and receiving-countries. Analysing the policies and debates about these new flows in the home and host countries' this book shows how contentious the issue of intra-EU mobility has recently become in the context of the crisis when the right for EU citizens to move within the EU had previously not been questioned for decades. Overall, the strength of this edited volume is that it compiles in a systematic way quantitative and qualitative analysis of these renewed Southern European migration flows and draws the lessons from this changing climate on EU migration.

"This is the book that the new South-North European migrations of the turbulent crisis years were demanding. It is timely, geographically and contextually comprehensive, empirically rich, and conceptually and analytically ambitious. A true tour de force." Joaquín Arango, Complutense University of Madrid, Spain "The retrenchment of rights of freedom of movement, and the ongoing re-nationalisation of European space, poses crucial issues for the future of Europe. In this well-conceived collection of new research on South-North intra-EU migration, we understand how and why these migrants are some of the pioneers of a more integrated and equal continent. Yet, in the re-surfacing South-isms and East-isms of national politics - including growing hostility to Romanians, Greeks, Turks, or even Spanish and Italians - we may be witnessing the end of the idea of Europe as a united geo-political project." Adrian Favell, University of Leeds, UK

This open book is licensed under a Creative Commons License (CC BY-NC). You can download South-North Migration of EU Citizens in Times of Crisis ebook for free in PDF format (3.7 MB).

New and Old Routes of Portuguese Emigration
This book offers a comparative overview on Portuguese emigration in Europe and outside the EU in times of recession. It looks at Portuguese emigrants who, after the crisis of 2008, moved both intra-EU, such as UK, France, Switzerland, Germany and Spain, but also into countries with historical links, such as the USA and Canada, and to Portuguese spe...

Legal Dynamics of EU External Relations
This book offers a concise yet comprehensive review of the principles of EU external relations law. By carefully examining the role of the Union on the global scene, it provides a systematic overview of the relevant rules and competences, reflecting on the legal developments in their political and societal context. In addition to up-to-date analyse...