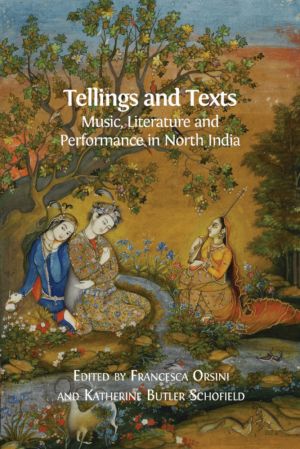 Examining materials from early modern and contemporary North India and Pakistan, Tellings and Texts brings together seventeen first-rate papers on the relations between written and oral texts, their performance, and the musical traditions these performances have entailed. The contributions from some of the best scholars in the field cover a wide range of literary genres and social and cultural contexts across the region.

The texts and practices are contextualized in relation to the broader social and political background in which they emerged, showing how religious affiliations, caste dynamics and political concerns played a role in shaping social identities as well as aesthetic sensibilities. By doing so this book sheds light into theoretical issues of more general significance, such as textual versus oral norms; the features of oral performance and improvisation; the role of the text in performance; the aesthetics and social dimension of performance; the significance of space in performance history and important considerations on repertoires of story-telling. The book also contains links to audio files of some of the works discussed in the text.

Tellings and Texts is essential reading for anyone with an interest in South Asian culture and, more generally, in the theory and practice of oral literature, performance and story-telling.

This open book is licensed under a Creative Commons License (CC BY). You can download Tellings and Texts ebook for free in PDF format (59.5 MB).

Part I
Between Texts and Practices
Chapter 1
The Example in Dadupanthi Homiletics
Chapter 2
Making it Vernacular in Agra: The Practice of Translation by Seventeenth-Century Jains
Chapter 3
World Enough and Time: Religious Strategy and Historical Imagination in an Indian Sufi Tale
Chapter 4
Hearing Mo'jizat in South Asian Shi'ism
Part II
Books and Performances, Books for Performance
Chapter 5
Note to Self: What Marathi Kirtankars' Notebooks Suggest about Literacy, Performance, and the Travelling Performer in Pre-Colonial Maharashtra
Chapter 6
A Handbook for Storytellers: The Ṭirāz al-akhbār and the Qissa Genre
Chapter 7
Did Surdas Perform the Bhāgavata Purāṇa?
Chapter 8
Text, Orality, and Performance in Newar Devotional Music
Part III
Written Clues about Performed Texts
Chapter 9
Listening for the Context: Tuning in to the Reception of Riti Poetry
Chapter 10
Reading the Acts and Lives of Performers in Mughal Persian Texts
Chapter 11
Persian Poets on the Streets: The Lore of Indo-Persian Poetic Circles in Late Mughal India
Chapter 12
Texts and Tellings: Kathas in the Fifteenth and Sixteenth Centuries
Chapter 13
A Curious King, a Psychic Leper, and the Workings of Karma: Bajid's Entertaining Narratives
Part IV
Musical Knowledge and Aesthetics
Chapter 14
Raga in the Early Sixteenth Century
Chapter 15
Learning to Taste the Emotions: The Mughal Rasika
Chapter 16
Paradigms of Performance and Poetical Composition in the Seventeenth-Century Bengali Literature of Arakan
Chapter 17
The Shi'i Faces of Nizamuddin: Nizami Drumming and Texts in Delhi and Karachi

The Sword of Judith
The Book of Judith tells the story of a fictitious Jewish woman beheading Holofernes, the general of a powerful army, to free her people. The story has fascinated artists and authors for centuries, and is becoming a major field of research in its own right. The Sword of Judith is the first multidisciplinary collection of essays to discuss repres...

Paris Bride
In July 1905, in Paris, a young Anglo-French woman called Marie Wheeler became the bride of a Swiss émigré, Johannes Schad. Immediately after the wedding, Marie and Johannes moved to London. And there they lived for nineteen years. In 1924, however, something happened to change their lives, and Marie, in many respects, simply disappeared. Pari...

The Making of Islamic Heritage
Offering key insights into critical debates on the construction, management and destruction of heritage in Muslim contexts, this volume considers how Islamic heritages are constructed through texts and practices which award heritage value. It examines how the monolithic representation of Islamic heritage (as a singular construct) can be enriched by...

Searching for Sharing
In a world where new technologies are being developed at a dizzying pace, how can we best approach oral genres that represent heritage? Taking an innovative and interdisciplinary approach, this volume explores the idea of sharing as a model to construct and disseminate the knowledge of literary heritage with the people who are represented by and in...