The Bluefin Tuna Fishery in the Bay of Biscay 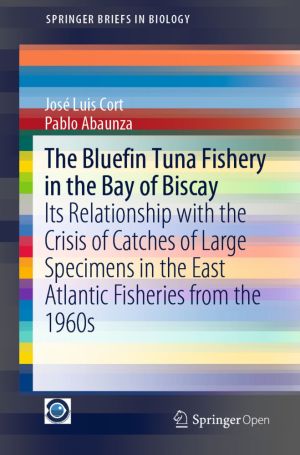 This book is an original contribution to the knowledge on fishing and research associated with one of the most enigmatic fish of our seas: bluefin tuna, Thunnus thynnus (L.). Based on available evidence, it reconstructs the possible methods used to catch large spawners in the Strait of Gibraltar thousands of years ago and describes the much more recent overfishing that led to a great reduction in the catches of the trap fishery on the area and the disappearance of the northern European fisheries. It is the first book to relate the overfishing of juvenile fishes in certain areas to the decline of large spawners in other very distant areas, revealing one of the main underlying causes of this decline, which has remained a mystery to the fishing sector and scientists alike for over 50 years. This finding should serve to prevent similar cases from arising in the future.

This open book is licensed under a Creative Commons License (CC BY). You can download The Bluefin Tuna Fishery in the Bay of Biscay ebook for free in PDF format (8.9 MB).

Impact of Information Society Research in the Global South
The second volume in the SIRCA book series investigates the impact of information society initiatives by extending the boundaries of academic research into the realm of practice. Global in scope, it includes contributions and research projects from Asia, Africa and Latin America. The international scholarly community has taken a variety of approach...