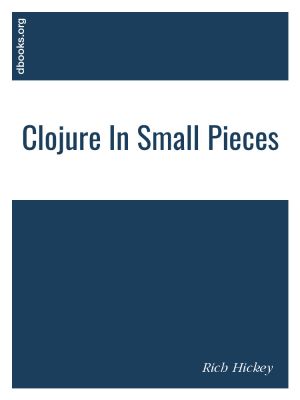 Rich Hickey invented Clojure. This is a fork of the project to experiment with literate programming as a development and documentation technology.

Most programmers are still locked into the idea of making a program out of a large pile of tiny files containing pieces of programs. They do not realize that this organization was forced by the fact that machines like the PDP 11 only had 8k of memory and a limit of 4k buffers in the editor. Thus there was a lot of machinery built up, such as overlay linkers, to try to reconstruct the whole program.

The time has come to move into a more rational means of creating and maintaining programs. Knuth suggested we write programs like we write literature, with the idea that we are trying to communicate the ideas to other people. The fact that the machine can also run the programs is a useful side-effect but not important.

Very few people have seen a literate program so this is intended as a complete working example, published in book form. The intent is that you can sit and read this book like any other novel. At the end of it you will be familiar with the ideas and how those ideas are actually expressed in the code. If programmers can read it and understand it then they can maintain and modify it. The ideas will have been communicated. The code will be changed to match changes in the idea. We will all benefit.

This open book is licensed under a Open Publication License (OPL). You can download Clojure In Small Pieces ebook for free in PDF format (5.4 MB).

Methods for Measuring Greenhouse Gas Balances and Evaluating Mitigation Options in Smallholder Agriculture
​​This book provides standards and guidelines for quantifying greenhouse gas emissions and removals in smallholder agricultural systems and comparing options for climate change mitigation based on emission reductions and livelihood trade-offs. Globally, agriculture is directly responsible for about 11% of annual greenhouse gas (GHG) emissions a...

Small Cities, Big Issues
Small Canadian cities confront serious social issues as a result of the neoliberal economic restructuring practiced by both federal and provincial governments since the 1980s. Drastic spending reductions and ongoing restraint in social assistance, income supports, and the provision of affordable housing, combined with the offloading of social respo...

Fundamental Astronomy
Now in its sixth edition this successful undergraduate textbook gives a well-balanced and comprehensive introduction to the topics of classical and modern astronomy. While emphasizing both the astronomical concepts and the underlying physical principles, the text provides a sound basis for more profound studies in the astronomical sciences. The cha...

Greening the Financial Sector
Given the manifold challenges of financial sectors in developing and transition countries, one might be tempted to believe that embarking on "green" finance is not a priority for financial systems development. However, there are a number of arguments against this view. Environmental finance, particularly energy efficiency and renewable en...

Child Protection in England, 1960–2000
This book explores how children, parents, and survivors reshaped the politics of child protection in late twentieth-century England. Activism by these groups, often manifested in small voluntary organisations, drew upon and constructed an expertise grounded in experience and emotion that supported, challenged, and subverted medical, social work, l...