Design Science and Its Importance in the German Mathematics Educational Discussion 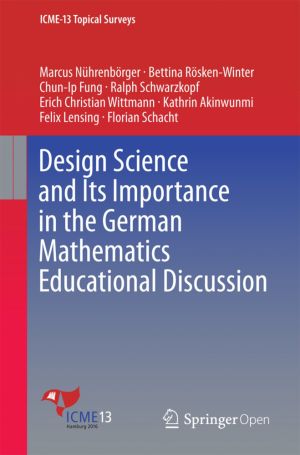 This ICME-13 Topical Survey reviews the state-of-the-art by first exploring the roots and scope of design science. Second, it presents two examples of current design science projects that focus on substantial learning environments including a student and a teacher perspective. Subsequently, the book elaborates on how empirical research can be conceptualised within design science. Lastly, it explores developments in design science from a national and international perspective, while also discussing current trends in design research. Within the German-language tradition, considering 'mathematics education as a design science' primarily draws on the works of Wittmann. The core of this approach constitutes designing and investigating learning environments that involve substantial mathematics.

This open book is licensed under a Creative Commons License (CC BY). You can download Design Science and Its Importance in the German Mathematics Educational Discussion ebook for free in PDF format (1.3 MB).

Taking the EU to Court
This book provides an exhaustive picture of the role that annulment conflicts play in the EU multilevel system. Based on a rich dataset of annulment actions since the 1960s and a number of in-depth case studies, it explores the political dimension of annulment litigation, which has become an increasingly relevant judicial tool in the struggle over ...

European Traditions in Didactics of Mathematics
This book discusses several didactic traditions in mathematics education in countries across Europe, including France, the Netherlands, Italy, Germany, the Czech and Slovakian Republics, and the Scandinavian states. It shows that while they all share common features both in the practice of learning and teaching at school and in research and develop...