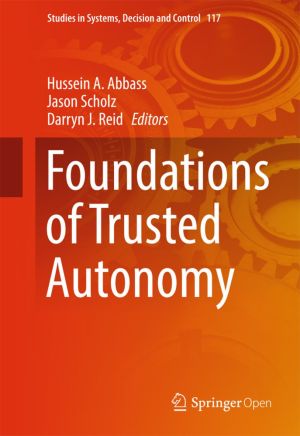 This book establishes the foundations needed to realize the ultimate goals for artificial intelligence, such as autonomy and trustworthiness. Aimed at scientists, researchers, technologists, practitioners, and students, it brings together contributions offering the basics, the challenges and the state-of-the-art on trusted autonomous systems in a single volume. The book is structured in three parts, with chapters written by eminent researchers and outstanding practitioners and users in the field. The first part covers foundational artificial intelligence technologies, while the second part covers philosophical, practical and technological perspectives on trust. Lastly, the third part presents advanced topics necessary to create future trusted autonomous systems. The book augments theory with real-world applications including cyber security, defence and space.

This open book is licensed under a Creative Commons License (CC BY). You can download Foundations of Trusted Autonomy ebook for free in PDF format (8.5 MB).

Foundations of Software Science and Computation Structures
This book constitutes the proceedings of the 21st International Conference on Foundations of Software Science and Computational Structures, FOSSACS 2018, which took place in Thessaloniki, Greece, in April 2018, held as part of the European Joint Conference on Theory and Practice of Software, ETAPS 2018.The 31 papers presented in this volume were ca...

The Foundations of Hip-Hop Encyclopedia
Deejaying, emceeing, graffiti writing, and breakdancing. Together, these artistic expressions combined to form the foundation of one of the most significant cultural phenomena of the late 20th century - Hip-Hop. Rooted in African American culture and experience, the music, fashion, art, and attitude that is Hip-Hop crossed both racial boundaries an...