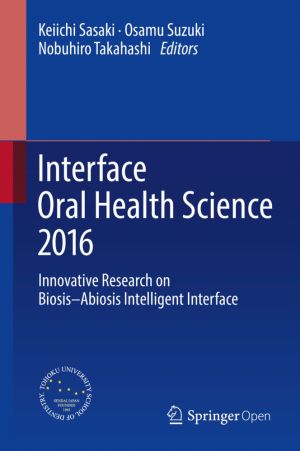 This volume broadens understanding of dentistry and promotes interdisciplinary research across a wide range of related fields, based on the symposium entitled "Innovative Research for Biosis–Abiosis Intelligent Interface 2016". It aims to create highly functional and autonomic intelligent interface by combining highly functional interface science with the technology of an evaluation and a control at the interface, with the various topics of biomaterials, innovation for oral science and application, regenerative oral science, and medical engineering. Since 2002, the Tohoku University Graduate School of Dentistry has hosted "Interface Oral Health Science" several times as the main theme of dental research in the twenty-first century, and this is the sixth proceedings of the symposiums following the ones in 2005, 2007, 2009, 2011, and 2014.

This book benefits not only dental scientists but also other health scientists including medical physicians and pharmacologists, material scientists, engineers, and any scientist who is involved in variety of disciplines.

This open book is licensed under a Creative Commons License (CC BY). You can download Interface Oral Health Science 2016 ebook for free in PDF format (11.3 MB).

Interface Oral Health Science 2014
​The Tohoku University Graduate School of Dentistry first introduced the concept of "Interface Oral Health Science", designed to establish and maintain healthy oral cavities, which are home to a number of mixed systems. Included in those systems are: (1) host tissues such as teeth, mucosa, muscle and bone, (2) parasites and microorganis...

Handbook of Life Course Health Development
This handbook synthesizes and analyzes the growing knowledge base on life course health development (LCHD) from the prenatal period through emerging adulthood, with implications for clinical practice and public health. It presents LCHD as an innovative field with a sound theoretical framework for understanding wellness and disease from a lifespan p...

Secondary Analysis of Electronic Health Records
This open book trains the next generation of scientists representing different disciplines to leverage the data generated during routine patient care. It formulates a more complete lexicon of evidence-based recommendations and support shared, ethical decision making by doctors with their patients. Diagnostic and therapeutic technologies continue ...

A Life Course Perspective on Health Trajectories and Transitions
This book examines health trajectories and health transitions at different stages of the life course, including childhood, adulthood and later life. It provides findings that assess the role of biological and social transitions on health status over time.The essays examine a wide range of health issues, including the consequences of military servic...

Multilevel Modelling for Public Health and Health Services Research
This book is a practical introduction to multilevel modelling or multilevel analysis (MLA) – a statistical technique being increasingly used in public health and health services research. The authors begin with a compelling argument for the importance of researchers in these fields having an understanding of MLA to be able to judge not only the g...