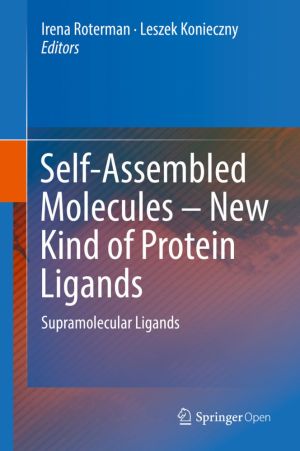 The subject of this book relates to protein ligands with particular structural and complexation properties. They are composed of self-assembled molecules, capable of penetrating as a unit into proteins outside the binding site. The ribbon-like supramolecular system only permits the penetration of self-assembled molecules into the protein-body and formation of stable complexes. Supramolecular Congo red and similar compounds fit these requirements. Destabilized protein fragments enable the penetration of such ligands, with susceptibility to supramolecular ligand binding often associated with protein function. As a result, complexation modifies their functional effects. The activity of enzymes is inhibited by arresting them in the complexed state, but "naturally irreversible" complexation as in the case of immune complexation, is enhanced instead. This property offers many attractive possibilities of using supramolecular ligands as described in this book.

This open book is licensed under a Creative Commons License (CC BY). You can download Self-Assembled Molecules – New Kind of Protein Ligands ebook for free in PDF format (8.4 MB).

The Biopsychosocial Model of Health and Disease
'This is an incredibly audacious book. Derek Bolton and Grant Gillett brilliantly succeed in providing the big picture that was lacking in the defense of the biopsychosocial model promoted by Engel 40 years ago.' - Steeves Demazeux, Assistant Professor in philosophy, Bordeaux-Montaigne University, FranceThis book is a systematic update of...

Resilience: A New Paradigm of Nuclear Safety
This book summarizes presentations and discussions from the two-day international workshop held at UC Berkeley in March 2015, and derives questions to be addressed in multi-disciplinary research toward a new paradigm of nuclear safety. The consequences of the Fukushima Daiichi nuclear accident in March 2011 have fuelled the debate on nuclear safet...

Sustainable Food Systems
Faced with a global threat to food security, it is perfectly possible that society will respond, not by a dystopian disintegration, but rather by reasserting co-operative traditions. This book, by a leading expert in urban agriculture, offers a genuine solution to today's global food crisis. By contributing more to feeding themselves, cities c...

Who Saved the Parthenon?
In this magisterial book, William St Clair unfolds the history of the Parthenon throughout the modern era to the present day, with special emphasis on the period before, during, and after the Greek War of Independence of 1821 - 32. Focusing particularly on the question of who saved the Parthenon from destruction during this conflict, with the help ...