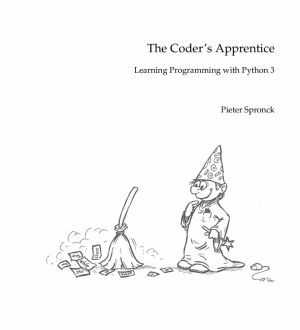 The Coder's Apprentice is a course book, written by Pieter Spronck, that is aimed at teaching Python 3 to students and teenagers who are completely new to programming. Contrary to many of the other books that teach Python programming, this book assumes no previous knowledge of programming on the part of the students, and contains numerous exercises that allow students to train their programming skills.

The goal of this book is to teach anyone how to create useful programs in Python. It should be usable by secondary school students, and university and college students for whom computer programming is not naturally incorporated in their course program. Its aim is to give anyone the means to become proficient in programming, and as such get prepared to perform well in the 21st century job market.

This open book is licensed under a Creative Commons License (CC BY). You can download The Coder's Apprentice ebook for free in PDF format (4.2 MB).

Theories in and of Mathematics Education
This survey provides an overview of German meta-discourse on theories and mathematics education as a scientific discipline, from the 1970s to the 1990s. Two theory strands are offered: a semiotic view related to Peirce and Wittgenstein (presented by Willibald Dörfler), and the theory of learning activity by Joachim Lompscher (presented by Regina B...