The Condition of Digitality

A Post-Modern Marxism for the Practice of Digital Life 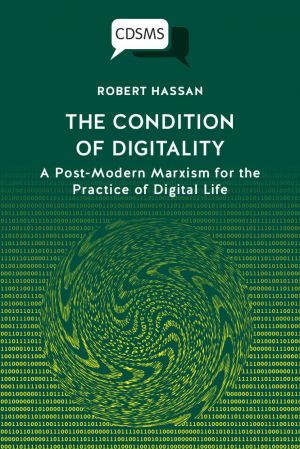 David Harvey's The Condition of Postmodernity rationalised capitalism's transformation during an extraordinary year: 1989. It gave theoretical expression to a material and cultural reality that was just then getting properly started - globalisation and postmodernity - whilst highlighting the geo-spatial limits to accumulation imposed by our planet.

However this landmark publication, author Robert Hassan argues, did not address the arrival of digital technology, the quantum leap represented by the move from an analogue world to a digital economy and the rapid creation of a global networked society. Considering first the contexts of 1989 and Harvey's work, then the idea of humans as analogue beings he argues this arising new human condition of digitality leads to alienation not only from technology but also the environment. This condition he suggests, is not an ideology of time and space but a reality stressing that Harvey's time-space compression takes on new features including those of 'outward' and 'inward' globalisation and the commodification of all spheres of existence.

Lastly the author considers culture's role drawing on Rahel Jaeggi's theories to make the case for a post-modern Marxism attuned to the most significant issue of our age. Stimulating and theoretically wide-ranging The Condition of Digitality recognises post-modernity's radical new form as a reality and the urgent need to assert more democratic control over digitality.

This open book is licensed under a Creative Commons License (CC BY-NC-ND). You can download The Condition of Digitality ebook for free in PDF format (14.1 MB).

Circular Migration and the Rights of Migrant Workers in Central and Eastern Europe
This open book adopts a rights-based approach to shed light on the different legal and policy instruments that have been developed to implement circular migration policies in the EU, and their consequences for the rights of migrant workers. It contributes to the understanding of the meaning of this concept in general and in the EU, as well as speci...

Science as Social Existence
In this bold and original study, Jeff Kochan constructively combines the sociology of scientific knowledge (SSK) with Martin Heidegger's early existential conception of science. Kochan shows convincingly that these apparently quite different approaches to science are, in fact, largely compatible, even mutually reinforcing. By combining Heidegger...

The SysAdmin Handbook
Over the past two years, Simple-Talk has published articles on a variety of SysAdmin topics, from Exchange to Virtualization, and including everything from Powershell to Unified Messaging. We have brought the best of these articles together to form The SysAdmin Handbook. With over fifty articles packed into this book, it will be an essential refere...