The Indigenous Identity of the South Saami

Historical and Political Perspectives on a Minority within a Minority 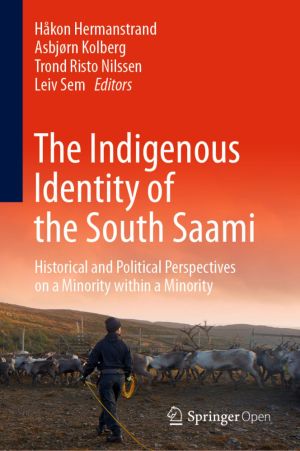 This book is a novel contribution in two ways: It is a multi-disciplinary examination of the indigenous South Saami people in Fennoscandia, a social and cultural group that often is overlooked as it is a minority within the Saami minority. Based on both historical material such as archaeological evidence, 20th century newspapers, and postcard motives as well as current sources such as ongoing land-right trials and recent works of historiography, the articles highlight the culture and living conditions of this indigenous group, mapping the negotiations of different identities through the interaction of Saami and non-Saami people through the ages. By illuminating this under-researched field, the volume also enriches the more general debate on global indigenous history, and sheds light on the construction of a Scandinavian identity and the limits of the welfare state and the myth of heterogeneity and equality.

This open book is licensed under a Creative Commons License (CC BY). You can download The Indigenous Identity of the South Saami ebook for free in PDF format (4.6 MB).

Social Statistics and Ethnic Diversity
This book examines the question of collecting and disseminating data on ethnicity and race in order to describe characteristics of ethnic and racial groups, identify factors of social and economic integration and implement policies to redress discrimination. It offers a global perspective on the issue by looking at race and ethnicity in a wide vari...

A Memory of Ice
In the southern summer of 1972/73, the Glomar Challenger was the first vessel of the international Deep Sea Drilling Project to venture into the seas surrounding Antarctica, confronting severe weather and ever-present icebergs. A Memory of Ice presents the science and the excitement of that voyage in a manner readable for non-scientists. Woven i...

The Everyday Life of an Algorithm
This book begins with an algorithm - a set of IF...THEN rules used in the development of a new, ethical, video surveillance architecture for transport hubs. Readers are invited to follow the algorithm over three years, charting its everyday life. Questions of ethics, transparency, accountability and market value must be grasped by the algorithm in ...

Sailing from Polis to Empire
What can the architecture of ancient ships tell us about their capacity to carry cargo or to navigate certain trade routes? How do such insights inform our knowledge of the ancient economies that depended on maritime trade across the Mediterranean? These and similar questions lie behind Sailing from Polis to Empire, a fascinating insight into th...