From the Internet Imaginary to Network Ideologies 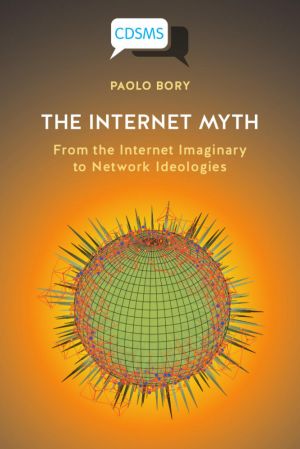 The Internet Myth retraces and challenges the myth laying at the foundations of the network ideologies - the idea that networks, by themselves, are the main agents of social, economic, political and cultural change. By comparing and integrating different sources related to network histories, this book emphasizes how a dominant narrative has extensively contributed to the construction of the Internet myth while other visions of the networked society have been erased from the collective imaginary. The book decodes, analyzes and challenges the foundations of the network ideologies looking at how networks have been imagined, designed and promoted during the crucial phase of the 1990s.

Three case studies are scrutinized so as to reveal the complexity of network imaginaries in this decade: the birth of the Web and the mythopoesis of its inventor; and the histories of two Italian networking projects, the infrastructural plan Socrate and the civic network Iperbole, the first to give free Internet access to citizens.

The Internet Myth thereby provides a compelling and hidden sociohistorical narrative in order to challenge one of the most powerful myths of our time.

This open book is licensed under a Creative Commons License (CC BY-NC-ND). You can download The Internet Myth ebook for free in PDF format (16.6 MB).

Social Theory after the Internet
The internet has fundamentally transformed society in the past 25 years, yet existing theories of mass or interpersonal communication do not work well in understanding a digital world. Nor has this understanding been helped by disciplinary specialization and a continual focus on the latest innovations. Ralph Schroeder takes a longer-term view, synt...

Hippocrates Now
This book will challenge widespread assumptions about Hippocrates (and, in the process, about the history of medicine in ancient Greece and beyond) and will also explore the creation of modern myths about the ancient world. Why do we continue to use Hippocrates, and how are new myths constructed around his name? How do news stories and the internet...

The Missing Link
Web development is an evolving amalgamation of languages that work in concert to receive, modify, and deliver information between parties using the Internet as a mechanism of delivery. While it is easy to describe conceptually, implementation is accompanied by an overwhelming variety of languages, platforms, templates, frameworks, guidelines, and ...

The Narrative Subject
This open book considers the stories of adolescents and young adults from different regions of the world who use digital media as instruments and stages for storytelling, or who make themselves the subject of storytelling. These narratives discuss interconnectedness, self-staging, and managing boundaries. From the perspective of media and cultural ...

Mobile Research Methods
Daily activity sees data constantly flowing through cameras, the internet, satellites, radio frequencies, sensors, private appliances, cars, smartphones, tablets and the like. Among all the tools currently used, mobile devices, especially mobile phones, smartphones and tablets, are the most widespread, with their use becoming prevalent in everyday ...