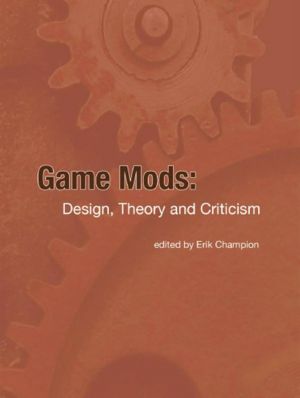 Are games worthy of academic attention? Can they be used effectively in the classroom, in the research laboratory, as an innovative design tool, as a persuasive political weapon? Game Mods: Design Theory and Criticism aims to answer these and more questions. It features chapters by authors chosen from around the world, representing fields as diverse as architecture, ethnography, puppetry, cultural studies, music education, interaction design and industrial design. How can we design, play with and reflect on the contribution of game mods, related tools and techniques, to both game studies and to society?

What is a mod? Mods, short for 'modifications', are user- made edits made to PC videogames, the game equivalent of fan fiction. Traditionally free, they range from minor code changes to fix bugs or smoothen gameplay to 'total conversions' - complete overhauls of art assets to form an entirely new experience.

Game modifications can be artwork, skins (graphic look), tools, total game transformations, new code, or, perhaps less clearly, games ported to other platforms by fans. They can also be homage games, which link back to earlier separate, but thematically-linked game worlds. These are not necessarily mods in a strict sense. The endgame, rather than higher, locked levels, could be the modding itself, to extend and expand the enjoyment of the game. In a similar vein, Scacchi (2010) proposed five types of game mods: user interface customizations, game conversions, machinima and art mods, game computer customization, and game console hacking.

So there are many critical and theoretical and design-related issues lurking beneath the surface of game mods. Critical issues range from how to judge the aesthetic, technical and social values of game mods, to how or even whether one can construct general principles of criticism that can be applied to the judgment of game mods. Would this differ significantly from criticism in game studies? Are the theoretical issues involved in game mods merely a subset of game design theory, or something else? Should one reference or pay homage to the original game, can a designer display genuine innovation and creativity in the design of a mod? Could the design of game mods, and the design of tools to create game mods, be improved through criticism and theory? Are these toolsets useful and usable in teaching? And can the tools and techniques of game mod design be applied in areas beyond computer games?

This open book is licensed under a Creative Commons License (CC BY-NC-ND). You can download Game Mods ebook for free in PDF format (17.7 MB).

Chapter 1
Between a Mod and a Hard Place
Chapter 2
Between Fact and Fiction in Cultural Heritage
Chapter 3
Use of "The Elder Scrolls Construction Set" to create a Virtual History Lesson
Chapter 4
Game Mods, Engines, and Architecture
Chapter 5
Teaching Mods with Class
Chapter 6
From Games to Movies: Machinima and Modifications
Chapter 7
CryVE: Modding the CryEngine2 to create a CAVE System

3D Game Development with LWJGL 3
This book will introduce the main concepts required to write a 3D game using the LWJGL 3 library. LWJGL is a Java library that provides access to native APIs used in the development of graphics (OpenGL), audio (OpenAL) and parallel computing (OpenCL) applications. This library leverages the high performance of native OpenGL applications while us...

2D Game Development: From Zero to Hero
This is a small project that aims to gather some knowledge about game development and make it available to everyone. As well as being a source of knowledge this project aims to be a learning experience for everyone involved too, by gathering contributions from the community, teaching others how to make a game, teaching algorithms but also learni...

Building Games for Firefox OS
Join us in the quest for building games for Firefox OS, the new mobile operating system by Mozilla. Empowered by this books practical approach you will learn thru examples how to develop a full game from the beginning all the way to the distribution in the Firefox Markeplace....

Games and Rules
Why do we play games and why do we play them on computers? The contributors of Games and Rules take a closer look at the core of each game and the motivational system that is the game mechanics. Games are control circuits that organize the game world with their (joint) players and establish motivations in a dedicated space, a "Magic Circle,&qu...

Cost and Revenue Overruns of the Olympic Games 2000–2018
In this book the cost and revenue overruns of Olympic Games from Sydney 2000 to PyeongChang 2018 from eight years before the Games to Games‐time are investigated to provide a base for future host cities. The authors evaluated the development of expenditure and revenues of the organizing committees to operate the event, and the investment of taxpa...

Los Angeles and the Summer Olympic Games
This open access book describes the three planning approaches and legacy impacts for the Olympic Games in one locale: the city of Los Angeles, USA. The author critically compares the similarities and differences of the LA Olympics by reviewing the 1932 and 1984 Olympics and by analyzing the concurrent planning process for the 2028 Olympics. The au...