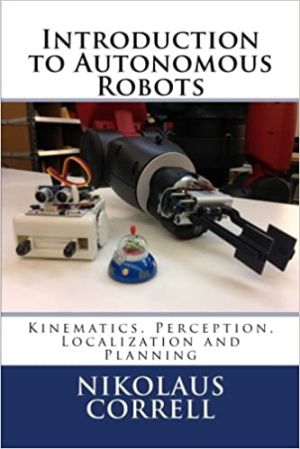 This book provides an algorithmic perspective to autonomous robotics to students with a sophomore-level of linear algebra and probability theory. Robotics is an emerging field at the intersection of mechanical engineering, electrical engineering, and computer science. With computers becoming more powerful, making robots smart is getting more and more into the focus of attention and robotics research most challenging frontier. While there is a large number of textbooks on the mechanics and dynamics of robots available to sophomore-level undergraduates, books that provide a broad algorithmic perspective are mostly limited to the graduate level. This book has therefore been developed not to create "yet another textbook, but better than the others", but to allow us to teach robotics to the 3rd and 4th year undergraduates at the Department of Computer Science at the University of Colorado.

Although falling under the umbrella of "Artificial Intelligence", standard AI techniques are not sufficient to tackle problems that involve uncertainty, such as a robot's interaction in the real world. This book uses simple trigonometry to develop the kinematic equations of manipulators and mobile robots, then introduces path planning, sensing, and lastly uncertainty. The robot localization problem is introduced by formally defining error propagation, which leads to Markov localization, Particle filtering and finally the Extended Kalman Filter, and Simultaneous Localization and Mapping. Instead of focusing on state-of-the-art solutions to a particular sub-problem, emphasis of the book is on a progressive step-by-step development concepts through recurrent examples that capture the essence of a problem. The described solutions might not necessarily be the best, however they are easy to comprehend and widely used in the community. For example, odometry and line-fitting are used to explain forward kinematics and least-squares solutions, respectively, and later serve as motivating examples for error propagation and the Kalman filter in a localization context.

Notably, the book is explicitly robot-agnostic, reflecting the timeliness of fundamental concepts. Rather, a series of possible project-based curricula are described in an Appendix and available online, ranging from a maze-solving competition that can be realized with most camera-equipped differential-wheel robots to manipulation experiments with a robotic arm, all of which can be entirely conducted in simulation to teach most of the core concepts.

This open book is licensed under a Creative Commons License (CC BY-NC-ND). You can download Introduction to Autonomous Robots ebook for free in PDF format (13.3 MB).

Introduction to Archaeology
This workbook was designed for the Introduction to Archaeology (ANTH 2339) class in the Department of Sociology and Anthropology, University of Texas at Arlington. It was created to provide exercises that supplement and expand on topics and issues raised in lecture. For each major topic, students complete exercises that serve a range of functions; ...

Introduction to Financial Accounting
Introduction to Financial Accounting is intended for a first course in introductory financial accounting. It has been extensively edited by Athabasca University and reflects current International Financial Reporting Standards (IFRS). A corporate approach is utilized versus beginning with a sole proprietorship emphasis and then converting to a corpo...

An Introduction to C & GUI Programming
Even if you are an absolute beginner, this book will teach you all you need to know to write simple programs in C and start creating GUIs. The first half of the book is an introduction to C, and covers the basics of writing simple command-line programs. The second half shows how to use the GTK user interface toolkit with C to create feature-rich...

Introduction to Law
This book is exceptional in the sense that it provides an introduction to law in general rather than the law of one specific jurisdiction, and it presents a unique way of looking at legal education. It is crucial for lawyers to be aware of the different ways in which societal problems can be solved and to be able to discuss the advantages and disad...

Moving Pictures
A free and open-source introduction to the art and science of cinema. From the earliest iterations to the latest innovations, this introductory text explores the tools and techniques of mise-en-scene, narrative form, cinematography, editing, sound and acting, how each has contributed to the evolution of cinematic language, and how that evolution im...