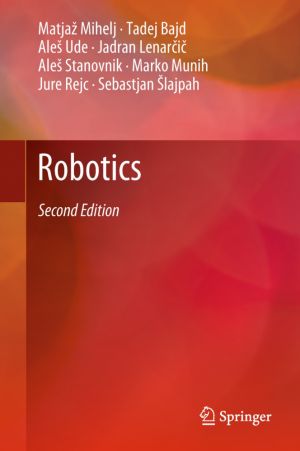 This book introduces readers to robotics, industrial robot mechanisms, and types of robots, e.g. parallel robots, mobile robots and humanoid robots. The book is based on over 20 years of teaching robotics and has been extensively class tested and praised for its simplicity.It addresses the following subjects: a general introduction to robotics; basic characteristics of industrial robot mechanisms; position and movement of an object, which are described by homogenous transformation matrices; a geometric model of robot mechanisms expanded with robot wrist orientation description in this new edition; a brief introduction to the kinematics and dynamics of robots; robot sensors and planning of robot trajectories; fundamentals of robot vision; basic control schemes resulting in either desired end-effector trajectory or force; robot workcells with feeding devices and robot grippers.

This 2nd edition has been expanded to include the following new topics: parallel robots; collaborative robots; teaching of robots; mobile robots; and humanoid robots. The book is optimally suited for courses in robotics or industrial robotics and requires a minimal grasp of physics and mathematics.

This open book is licensed under a Creative Commons License (CC BY). You can download Robotics ebook for free in PDF format (3.9 MB).

Elements of Robotics
This book bridges the gap between playing with robots in school and studying robotics at the upper undergraduate and graduate levels to prepare for careers in industry and research. Robotic algorithms are presented formally, but using only mathematics known by high-school and first-year college students, such as calculus, matrices and probability. ...

Robotics, AI, and Humanity
This open book examines recent advances in how artificial intelligence (AI) and robotics have elicited widespread debate over their benefits and drawbacks for humanity. The emergent technologies have for instance implications within medicine and health care, employment, transport, manufacturing, agriculture, and armed conflict. While there has been...

Annals of Scientific Society for Assembly, Handling and Industrial Robotics
This open proceedings presents a good overview of the current research landscape of industrial robots.The objective of MHI Colloquium is the successful networking at both academic and management level. Thereby, the colloquium focuses an academic exchange at a high level in order to distribute the obtained research results, to determine synergy effe...

An Introduction to Ethics in Robotics and AI
This open book introduces the reader to the foundations of AI and ethics. It discusses issues of trust, responsibility, liability, privacy and risk. It focuses on the interaction between people and the AI systems and Robotics they use. Designed to be accessible for a broad audience, reading this book does not require prerequisite technical, legal o...

Cognitive Supervision for Robot-Assisted Minimally Invasive Laser Surgery
This thesis lays the groundwork for the automatic supervision of the laser incision process, which aims to complement surgeons' perception of the state of tissues and enhance their control over laser incisions. The research problem is formulated as the estimation of variables that are representative of the state of tissues during laser cutting...

Nonparametric Bayesian Learning for Collaborative Robot Multimodal Introspection
This open book focuses on robot introspection, which has a direct impact on physical human - robot interaction and long-term autonomy, and which can benefit from autonomous anomaly monitoring and diagnosis, as well as anomaly recovery strategies. In robotics, the ability to reason, solve their own anomalies and proactively enrich owned knowledge is...